This year I helped cook for a small group of four people, here’s a look at what we ate and how it all came together. My contributions were almost all carbs.

Our amazing friend offered to bring porchetta and it was hands down 1) the best thing on the plate and 2) so much better than turkey. I’m not even a turkey hater! But pork is my favorite meat and porchetta is traditionally flavored with all of the Thanksgiving spices you know and love and I think this should be on everyone’s Thanksgiving table. 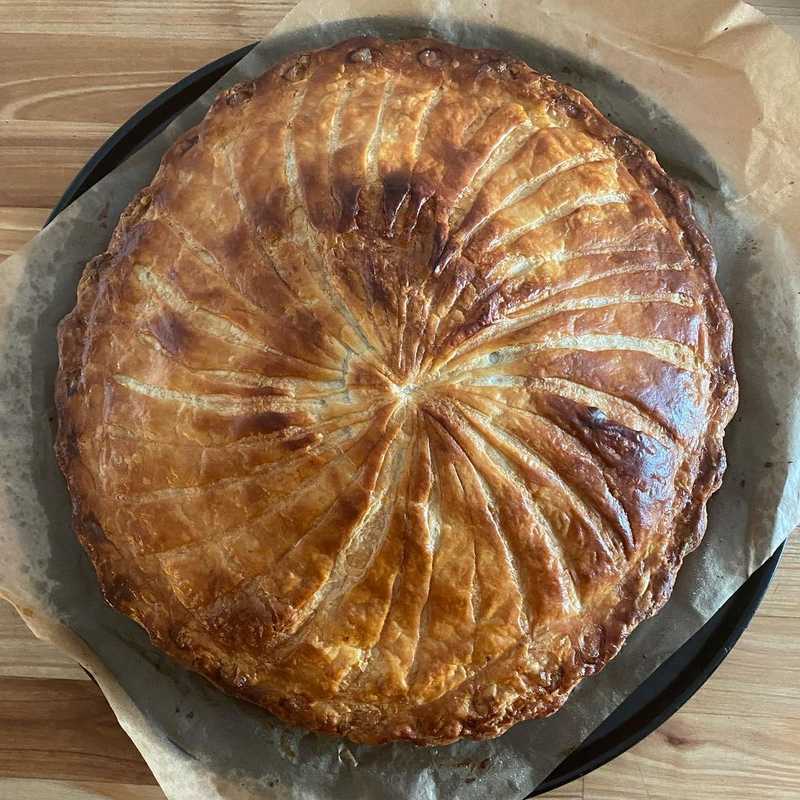 When I decided not to make a turkey I wanted to add some other kind of centerpiece pastry. I thought about doing a decorative pastry ring filled with squash and such but then I was flipping through Erin Jeanne McDowell’s “The Book on Pie” and found this beauty. I saw Sohla making rough puff pastry and stole the recipe she posted and it was honestly the best pastry I’ve ever made. This was a risky first time recipe but my crowd was forgiving.

Notes for future: I added some goat cheese and would add more of that in the future and maybe reduce the amount of kale.

Our friend used the porchetta drippings to make the Kenji roast potatoes. They were delicious but I do think I’ll go back to mashed potatoes next year. 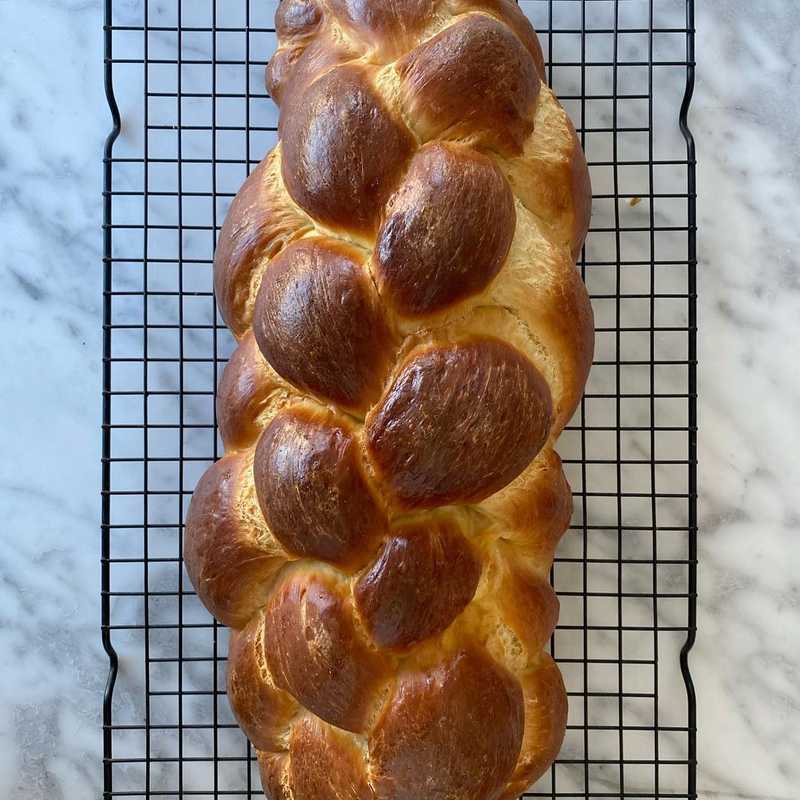 Made the challah and the resulting stuffing based on this smitten kitchen recipe. It honestly tastes like Stove Top and I wasn’t complaining. This was the first time I recall not using eggs in the stuffing and it was both easier and I think tastier this way (and I felt less bad about stealing bites of uncooked soggy croutons). I used part leeks and sauteed the aromatics with all of the butter at once but otherwise pretty much followed the recipe.

Notes for future: Would 100% make again but pump up the spices and add a dash of something acidic (sumac might be nice here!).

This is a new-ish Thanksgiving tradition for us - we made it for Thanksgiving in 2019 right after having something similar in New Orleans. It hits a lot of notes: it’s a little green, a little crunchy, a little creamy, and a little tangy.

I did a simple green salad with my favorite salad dressing. It was good but not necessary, especially with the sprouts.

I made the King Arthur Baking amish rolls with sweet potato — it’s a banger of a recipe that I’ve made at least a dozen times. My lone casserole dish was occupied by the stuffing but luckily a 12” cast iron has about the same volume as a 9x13” pan.

Notes for future: it takes a little longer to get the center cooked in the cast iron and I forget this every time. Cooked these for about 35 minutes (covered in foil for the last 10. recipe says 20-25).

I made a simple gravy with roux, onion, stock, and spices like black pepper and thyme. I think I added a splash of worcestershire and soy sauce. It was pretty good but not amazing so I’ll keep experimenting with gravy.

Notes for future: I made it ahead and had to thin it with more stock on the day of. I didn’t like the chunky onion so would either leave that out or blend it in in the future.

I used the recipe from Salt, Fat, Acid Heat.

Notes for future: Honestly I couldn’t taste the sage, so not sure the extra step of frying it is worth it (or I might just add more). It was a great condiment to have on the table though and would definitely do some kind of salsa verde again.

Another contribution from our friends: I don’t know how they do it but it’s perfectly balanced and due to some unfortunate acid restrictions I got to keep all the leftovers and I’m not complaining. 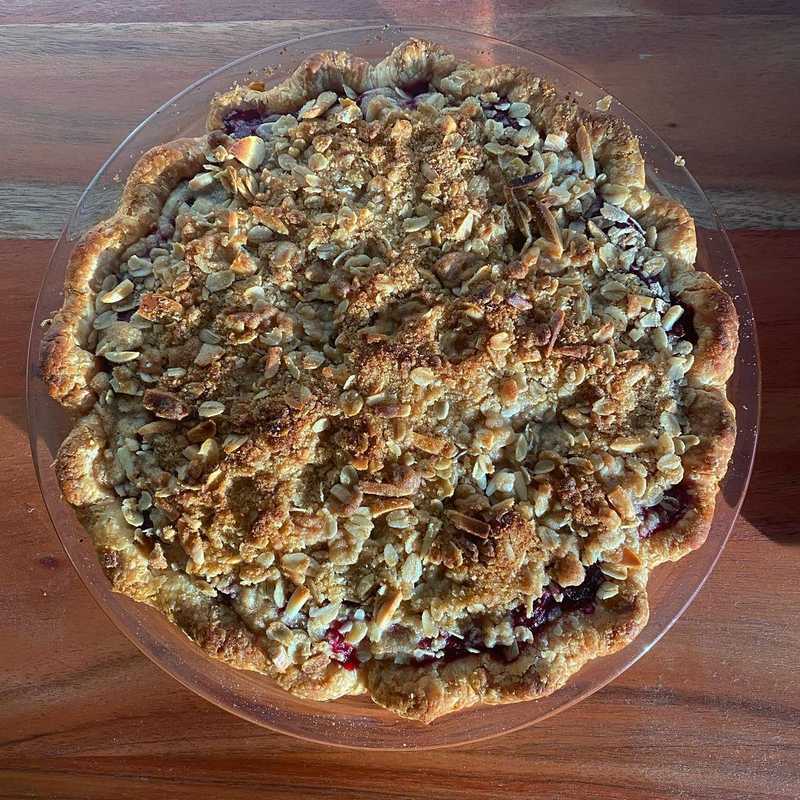 I was craving cherry pie but it’s hard to find frozen tart cherries which is my preferred pie cherry. I also thought it’d be nice to combine something more seasonal and the combination of sweet cherries (I used frozen from Trader Joe’s) and cranberries provides a nice balance. Didn’t use a recipe for the filling but added sugar, orange and lemon juice, orange zest, vanilla, and almond extract and probably something else. A little too tart but perfect with vanilla ice cream.

Van Leeuwan was having a buy 2 get 1 free sale so we got a pint of this. I’ve never had cheese ice cream before but our friends who had tried some in Taiwan said this was far less subtle. It simultaneously tastes exactly like the cheese packet and also like ice cream, which is a hard thing to imagine until you taste it. It’s definitely not gross, it’s even a little pleasant, but unexpected and strange to me!

I’m not the type of person who can wait for a single meal (which can trigger disordered eating habits on an already triggering day!) so I like to make a quiche to eat in the morning. It’s an easy thing to prep since it can be made a day ahead. This year I went with a broccoli cheddar vibe.

I did a lot this year but also prepared a lot ahead of time (and took Wednesday off of work) so it didn’t feel stressful (disclaimer that I also enjoy this stuff and have a dishwasher + additional cleanup help 😅).

Stock. We purchased some turkey back parts from the farmer’s market a few weeks ahead of time that my boyfriend used to make turkey stock. We froze this and used it for the stuffing and gravy. Even if you’re planning on making a turkey, this is a great way to get some stock ahead of time that you can use on the day.

Pie crust. I made 2 pie crusts and froze them (not knowing I’d need more later).

Pie filling. I made and froze the cranberry/cherry pie filling about a week ahead.

Planning. I also more or less set the menu so I could start thinking about other preparations and shop for shelf stable things like flour and butter (which you can freeze).

Gravy. I read that gravy keeps in the fridge for 5 days so I figured this was an easy one to make ahead.

Shopping. The nice thing about late fall/winter veggies is that they’ll keep, so we went to the farmer’s market to stock up on veggies like squash, kale, sprouts, and salad greens.

Challah. Challah is better if you let it rise in the fridge, plus if you’re using it for stuffing you need to allow time for it to stale, so I made the dough Monday and let it bulk prove overnight in the fridge.

Salad dressing. Made the dressing for the green salad.

Challah. Shaped and baked the Challah.

Thaw party. Set a reminder to take things out of the freezer that needed to defrost like the pie crust and pie filling.

More shopping. Went to the market for alliums like leeks and garlic (only because the Sunday market didn’t have them). Saw Matt Damon. Twice.

This was definitely the most exhausting prep day. On the bright side it freed up Thursday and I was so tired that I fell asleep at 9pm, got a solid 8 hours, and woke up feeling refreshed.

Even more shopping. This one was completely unnecessary, but we went to the beautiful Union Square Greenmarket because it’s the most exciting day to visit and picked up some eucalyptus for our serving table (aka my work desk turned buffet). Did not see Matt Damon.

Croutons. Chopped up the challah to stale.

Par baked pie crusts. One for the sweet pie and one for the quiche.

Rough puff pastry. This could have been done ahead of time but I was still debating just buying puff pastry at this point (I’m glad I made it this year!).

Dinner rolls. Made the dough and put in the fridge to bulk ferment overnight.

Salsa verde. Fried the sage and made the salsa verde.

Stuffing. Trimmed and washed the leeks and celery for easy use.

Pithivier filling. Roasted the squash, kale, and garlic filling for the savory pastry.

Quiche. Baked the quiche so we’d have it the next morning.

We had a pretty lazy morning and went for a coffee walk before we started prep. Our friends came over at 3:30pm and we ate around 5pm.

Rolls. Divided dough into 24 rolls, shaped and left out for 2nd proof. Baked once prooved.

Pie. Made the crumble topping, assembled the filling into the par-baked pie crust, and baked.

Stuffing. Sauteed the leek/celery mix, combined with the croutons. Let rest until it needed to be baked (left this until closer to when our friends arrived, I’m okay with soggier stuffing).

Pithivier. Rolled out the rough puff, filled with pre-made squash mix, scored a design on the top, and baked.

Shower. I even made time to blow dry my hair.

A lot of people say you shouldn’t experiment for Thanksgiving and while I’m lucky my experiments all turned out fine, I’m incredibly grateful that I had enough food to back me up if anything was a disaster and a forgiving audience that I wasn’t too worried about impressing ❤️.

It was a silly day filled with food, friends, and workshopping our screenplay about Matt Damon (played by Mindy Kaling) going insane and I’m thankful for every minute.