Why are loaf pan sizes measured in pounds?

Like a lot of my kitchen supplies, I bought my first loaf pan at a Goodwill in Ann Arbor, Michigan while I was in college. I probably wanted to make banana bread. 15 years later, I still have the pan. There’s no visible brand but it measures 10 inches long, 5 inches wide, and 3 inches tall.

This is apparently a large loaf pan, something I never thought about since it holds all the batter or dough most recipes call for. In fact, I never thought about loaf pan sizes at all until I made this marble rye bread which called for “a long covered baker (or other 2-pound capacity loaf pan).”

I wasn’t about to spend $80 on a new loaf pan so had to ask: what the heck is a 2-pound capacity pan? How do I measure that? How do I scale the recipe I see for the pan I have?

Why do loaf pans use pounds? Pounds of what?

I reached out to Sara Bir, an author, chef, and culinary educator who wrote one of the most comprehensive guides to loaf pans I found:

“My guess is the term “1 lb pan” originates from professional bakers working with yeasted dough, since when they divide dough up after bulk fermentation, it’s usually divided by weight.”

Bir continued, “I noticed during the pandemic when home sourdough baking became so popular, home bakers started using this terminology, too.”

Bir’s answer makes sense, but the reason decoding loaf pan sizes is complicated is because we shouldn’t be mixing weight and volume measurements. As seen in the picture above, a cup of water and a cup of sugar and a cup of oil weigh different amounts because they have different densities.

The weight of the loaf will depend on the type of bread you’re making too: “Within yeasted breads, density will play a role when determining pan size. A 100% whole grain loaf filled with soaked grains will weigh significantly more than a soft white bread that uses the same amount of flour, but the white bread will likely rise higher.” Tess, a Baker Support Specialist from King Arthur Baking said in a email. Bread also loses weight during the baking process due to evaporation. A former bakery owner noted that “most of my breads lose about 12% in baking…Drier doughs lose less, wetter doughs lose more.” Tess confirmed:

This means that the advertised weight, which is useful for bakeries and others selling their bread, is accurate.

I already have a loaf pan, how do I measure its capacity?

According to USA PAN, my vessel is a 1.5 pound pan. If I hadn’t found that link, how would I know​​ the capacity of my loaf pan?

“It really is quite confusing isn’t it?” Alexander from King Arthur Baking responded to my inquiry a few weeks ago. “The sizing conventions and units for loaf pans are all over the place and I too wish there was just one unit used. Alas, this is, for no good reason, not the case.”

Compared to the 2 pound capacity long covered baker, Alexander explained, “A 9 x 5 loaf pan, for instance would be only 124” cubed which would hold only around a 1 1/4 pound loaf.”

Here’s a handy chart comparing common pan sizes. Measure the width and length from the top, inside the rim. Most loaf pans (with the exception of Pullman style) are wider at the top than at the base so this distinction matters.

The capacity is easier to manage with batters for things like banana bread or pound cake: “As a rule of thumb, if the batter fills the pan 2/3 full, the loaf pan is at its limit. If you still have extra batter, don’t over-fill the pan. Instead, bake the excess batter a muffin pan, filling the empty tins with a few tablespoons of water to keep the pan from warping” Bir notes.

What is a “standard” loaf pan?

A lot of recipes, especially on professional baking sites will specify pan size by dimensions. If a recipe calls for a standard loaf pan, they are most likely asking for a “1 pound” pan that measures 8 1/2” x 4 1/2” x 2 1/2” high.

Keep in mind, this “standard” is relatively recent. Loaf pans weren’t popular until the 1800s when tin became a cheaper and more abundant resource. According to Bir, “Sixty years ago, a “standard loaf pan” was 9 x 5 x 2-1/2 inches. (Why the change? I have no idea.)”

This is why “standard” is in quotes, the answer depends on the recipe and a good recipe will include dimensions of the pan they want you to use. If a recipe doesn’t specify pan size I usually assume a 1.25 lb pan will work.

How to scale a recipe for your loaf pan

If your pan is bigger than what the recipe calls for, I’d just follow the recipe as written (I’m lazy). If you want to scale something down, like I did with this marble rye recipe, the basic formula is:

Repeat for each ingredient. This is easier with grams, but here’s a chart for cutting down a recipe by cups and a guide to using different pans.

Does a measuring a loaf pan in pounds have anything to do with pound cake?

No. The cake got its name because traditional pound cake used a pound of each ingredient (flour, sugar, butter, eggs). Most modern recipes are smaller: Martha Stewart’s pound cake recipe, the #1 hit on Google, calls for a 1 pound loaf pan with a batter that weighs almost exactly 2 pounds. To the recipe’s credit, it does refer to the pan by its volume capacity.

What size loaf pan should I get?

It depends on what you plan on baking, but I’ve been happy with my larger pan so I’d personally suggest at least a 1.25 pound pan (9” x 5”) to give you more leeway for larger recipes.

A ~1lb recipe yielded a flatter marble rye loaf in my 1.5lb capacity pan. Too much dough baked in my Pullman loaf pan with the lid on left a dense ring around the outer edge.

Some resources that might help you decide on the best pan size for you:

What to bake in your loaf pan 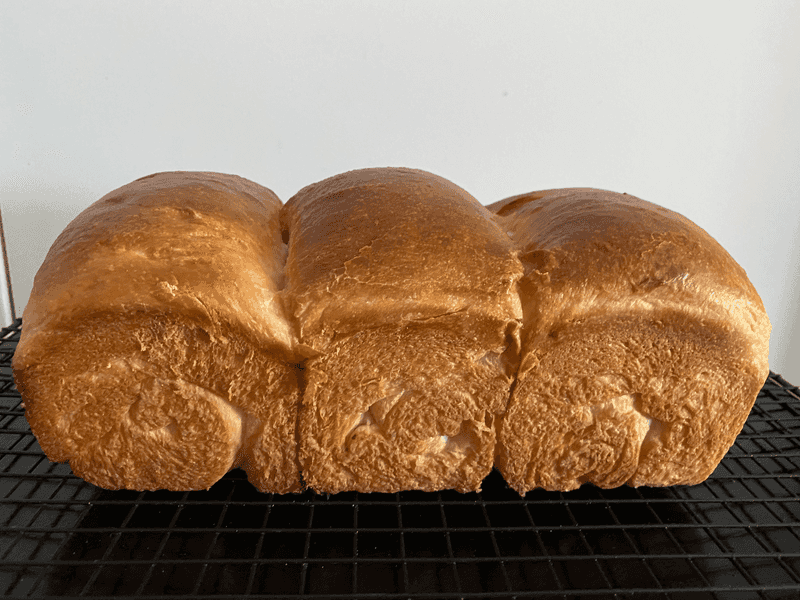 I’m a huge fan of this sourdough milk bread. A 1/2 recipe fits in a 1.5lb pan, which means a 1/3 recipe would fit well in a 1lb pan. The dough is really versatile, so make the whole recipe and turn the leftover dough into soft rolls or Chelsea buns.

And if you’re not in the mood for bread don’t worry, loaf pans are great for polenta cakes, small-batch bars, and meatloaf. If you have an insight into loaf pans that I missed, get in touch. Thanks for reading!