At worst a distraction

The wise Khushbu Shah said “If there is one indisputable truth in life, it is that boxed funfetti cake mix will always make the more superior funfetti cake.” An astute observation that also applies, in my opinion, to boxed brownies.

And yet last week, perhaps against better judgement, I proceeded to bake a funfetti cake from scratch.

Before the pandemic, baking never gripped my interest. I blamed the lack of spontaneity, the predetermined result that was all but impossible to save once it entered the oven. Maybe it was the San Francisco bread bros I was surrounded by for many years. Maybe it was that cooking is a necessity while baking produces auxiliary treats filled with carbs and fat and sugar and whatever else is bad for us this decade. Besides, my job used to involve so much travel that I wasn’t home for long stretches to procure the ingredients or consume the products.

These days I have the time. I’m lucky to have kept a stable job that lets me work from home. I’m also lucky that I have the flexibility to interrupt my day with folding a sourdough, doing a grocery run, or even baking a cake.

Like so many other millions of people self-quarantining at home, I turned to the kitchen for meditation and found it incredibly relaxing (or at least distracting). None of this is new of course: we love baking and crafting because we need something small and tangible during this never ending uncertainty. “Baking is a particularly effective activity for those whose professional lives exist mostly in the abstract,” the baker and cookbook author Alice Medrich observed in 2018 in response to an “anxiety baking” trend. Back in March (that was before 2018, right?) Sarah Harrison wrote for Wired that “activities like taking a bike ride or stress-baking a pan of cookies give people a sense of accomplishment and control.” Of course. I love control and haven’t had much of it lately.

And so I baked: biscuits, pies, brownies and pizzas. Boules, focaccia, ciabatta and baguettes. It was fun for a while but I nearly surrendered in May.

been on the sourdough starter/baking train for ~6 weeks and my thoughts so far:
🍞 excellent for focaccia
🥖 not worth the effort for loaves

Plan on trying longer and keeping the starter happy, but the ROI on a classic loaf doesn’t seem worth it long term (to me!) 🤷🏻‍♀️

Not worth the effort! Besides, there are no gatherings like offices or parties to share the results. Surely it made more sense to buy a She Wolf loaf or a slice of Mia’s cheesecake.

For whatever reason (definitely not the ongoing dread and complete lack of other hobbies) I kept going. I found more resources that resonated with me like Bryan Ford’s cookbook, which asks the same questions I’d been wondering like “should a brand-new baker be worried about hydration levels and crumb structures?” I started rewatching the Great British Baking Show with a new appreciation for a lot of what they were actually doing. I developed instincts and learned which shortcuts I could take. 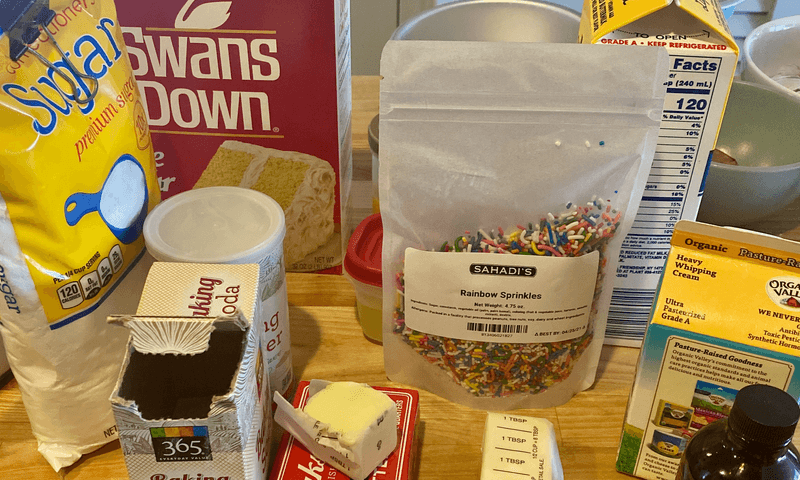 Then last week, inspired by the Butter & Scotch birthday cake and without Khushbu Shah’s wisdom, I conjured up the hubris to make my own funfetti concoction. I bought a couple 6” cake pans so I could halve a standard cake recipe (credit to my coworker Mica for that idea — I didn’t have any cake pans so it seemed like a reasonable investment).

It took 13 ingredients and four hours between Zoom calls and I have nothing to compare it to but god damn was it delicious.

I don’t know if it was worth it. I don’t know if I’d do it again. I do know that my time spent measuring, mixing, baking and frosting was at worst a distraction and at best a sugary meditation that delivered a sense of accomplishment. When I piped the last frosting rosette — and then scraped it all off and did it again but smaller because I ran out of icing — at least for a moment it felt like the more superior funfetti cake.

Donate: I learned about Chef Christa of Brooklyn Braised after she teamed up with one of my baking inspirations, the pastry chef for the never-opened Gage & Tollner, to raise money that funds takeout meals for Brooklyn families. If you’re able, you can donate here.